If you've seen my previous post, you might be wondering if I've abandoned Paperboy. Don't worry, I have not. I've just come to the – slightly late – realization that, before diving deeper into making a full-scale game, I should probably finish the one project I had been working on for years. So I put Paperboy aside for a little bit and focused heavily on finishing Simile Thoughts, a mappack for Mari0. This is what I'll be covering today.

Before anything else, however, I highly encourage you to take a look – and read – into the mappack's main post, over on the Stabyourself.net forums. Here's the post in its full glory. It covers a lot of what I'll talk about in this postmortem, and also has a few pictures of some of the levels if you're curious about the overall looks of the project, since I won't be covering every single level here. If you intend on playing this mappack, I highly recommend doing so before reading this blog post, as it will contain spoilers for some of the puzzles. 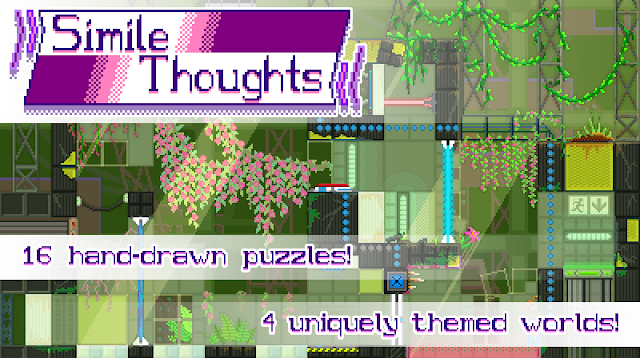 Read more »
Posted by HugoBDesigner at 7:40 PM No comments:

Well hello again! It's been a while, hasn't it? I suppose it's always a while in-between posts. I could go on about what I've been doing these past few years, or how my life has changed, or how a certain virus has caused a certain worldwide situation, but to be completely frank, not much has changed for me personally. I've been working on the odd project here and there, playing around with different games, programs, drawing styles; exploring music, poetry and a lot more. However, none of those were activities I deemed worthy of a blog post.

Enter Paperboy. This is a game idea I've had for two years now, and which my recent lack of employment has made me want to finally take seriously. Long story short, Paperboy is an isometric 3D puzzle game in which the goal is to deliver newspaper to people's doors. Silly premise? Absolutely, but that's by design. The core idea came from a casual conversation between some friends and I, in which we discussed "liquid fizzlers" - picture Portal 2's fizzlers, but behaving as a stream affected by physics. My mind fixated on garden hoses and sprinklers, to which I thought "why not lean in on that?" Thus Paperboy was born. The idea of a newspaper delivery boy navigating gardens and patios, trying to get a pile of newspaper to the front door of houses was both charming and comical, and starkly contrasted the seriousness and "realism" of most of my other game ideas.

All mechanics, obstacles, hazards, and overall themes and level design choices were conceived from the premise of delivering newspaper through gardens. Water became a threat to papers. Flower patches became obstacles for the player. Fences, gates, crates, they all became navigational assets. Levels could take on the form of pompous mansions with lush gardens, or concrete patios with mud pools and wet cement.

With such a simple, yet flexible premise, what took so long to get started?

Read more »
Posted by HugoBDesigner at 1:23 PM No comments:

Why hello there reader! I know, I know, I know... it's been a while. But don't think I've been sleeping on the job. Though it's been over a year since my last post, I've been working really hard on a lot of different projects. I plan on giving this blog a well-deserved overhaul soon, and keep you guys up to date on my recent projects. But I couldn't let this very opportunity pass by: my first publicly-released game, Filler. 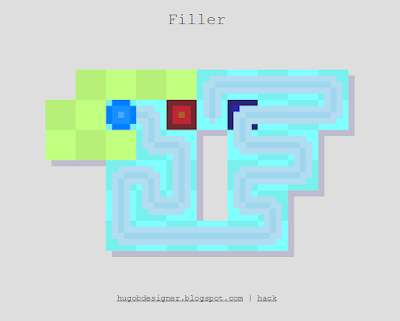 The mechanics and goals of the game are incredibly simple: fill all the empty spots, reach the target at the end. So, you might be thinking: "With such a simple concept, I bet Hugo pulled that out of his bottom in a couple days". Weeeeeeeeell, make that roughly 9 years. It all began a long, long time ago...

Well, here we are again! After a mere 2 years, I've finally got to a point where I can proudly present my Minigame Simulator! Why this long, you ask? Well, it wasn't always like this, of course, and it definitely didn't take that long. So in this post, I'll guide you through the creation of this "emulator", as well as its functionality!

It started way back around August of 2014. I've had this idea of making a game that could play other games within it, like those old "Minigame consoles" (of which, of course, I own one):

What I had in mind for this project was ambitious, but it had to start small. And I mean small. This is what version 0.1 looked like: 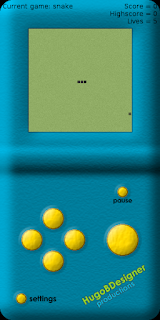 It was only the bare bones of what I planned for this. It's not obvious from this picture only, but version 0.1 didn't have anything! All it did was play the Snake game, and a pretty lame first version for that matter. Pause and Settings didn't work, and you couldn't change games. There was no secondary screen for score, level, etc, and the skin was that, no changing.
However, right on this first "sketch" (can barely even call that a "Simulator", to be fair), I've started paving the ground for what I planned. I started setting up multiple game loading, preparing custom skins, etc. With this, came version 0.2. We already had pausing, settings and customizable skins. I've also updated the game to LÖVE 0.9.1 (version 0.1 was made for 0.8.0).
After 0.2, I kept working on it. But the more things I added, the more complicated it got. Massive bugs emerged, the game became super laggy, so I paused development on it for a while. I tried updating it a few times along these two years, but other projects started taking priority, and this started falling behind.
It wasn't, however, until a couple months ago, that I decided to pick up the pieces of what I've left behind, shake off the dust, untwist the knots, and polish up what I had in order to add it to my Portfolio.
Read more »
Posted by HugoBDesigner at 11:39 PM 3 comments:

Hello again. To fulfill my last post's "promise", here I am with a blog post dedicated to my latest finished project: "Pattern Generator". You may be thinking "Hugo, how did you come up with the idea for PatGen? And why did you work so hard on it? What's the point?". To that, I reply "I dunno". Thanks for reading guys, have a good one!

Okay, but seriously now: Pattern Generator was a project I came up with back in late November, 2015. Back then, I was crazy about mazes, thanks to a huge influence from Sky (check them out, they've got some amazing mazes). We made a few lot of custom mazes, and every time we wanted a new pattern we had to make it by hand. So I tried solving that issue with a program that would render maze patterns based on your preferences. And thus, Pattern Generator was born! 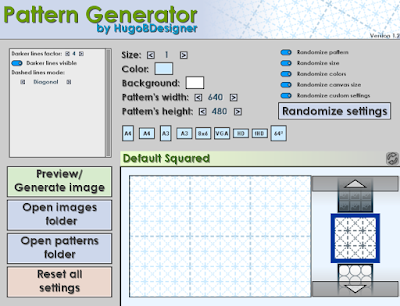 At first, it was going to be a pretty simple project, just to make maze-pattern-generating easier (mostly for myself). But then I thought "It could be used in many different cases, so why not make it decent, better suited and easier to use?". In that moment, I decided I'd make Pattern Generator a fully-fledged project, that I could put online for others to try without feeling ashamed that it's messy or slow.

Whoa, what just happened? Where is Hugo's blog, with its ugly textures, trippy background and sidebar cluttered with unfinished projects? Well, to answer your oddly-specific questions: it's gone. I realized it was about time I updated this blog, and made it look not only cleaner, but more professional. If I want to pursue a career that involves graphics and the internet even in the slightest (spoiler: I do), I might as well just dress up the things related to them. You know what they say, dress up for the job you want, not the one you have.
For quite a long time this blog has been the same. And it's always been a trouble showing it to anyone else. But now, after a good old blogcleaning Sunday, I'm ready to get back on tracks. If you were wondering whether or not I was dead, I wasn't. While I haven't been active on this blog as much as I hoped, I was still active online (if you know where to find me). The reason why I haven't posted much is that I couldn't get any project that I thought was worth making a new post about, and over the last few months, all my projects have been either cancelled or just weren't finished or big enough.
But that has changed, and will hopefully continue changing over the course of the next few months, as I intend to increase more and more my new Portfolio with all sorts of projects, drawings, games and much more. It took me a while to realize, don't ask me why, but if I want to have any chance in the gaming market, or any market for that matter, I might as well start working more and better on my personal projects.
Do not, however, misunderstand this as turning my blog into an online curriculum. This is still a personal blog with personal projects, and formalities are for the weak. I'll hopefully have more things to show to you guys in the near future. In fact, I'll make a post about my newest finished project, the Pattern Generator, which you can also peek into through my Portfolio.

But that's it for me today guys, hope to see you very soon :)


Posted by HugoBDesigner at 2:27 AM No comments:

Hello again, guys! I know, once again, this took a while to release, based on the release of the last part, but this time it wasn't due to having a new computer, like last time: it was delayed due to pure laziness and procrastination. So sorry about that...

Although this is the "official" last part of this series of physics tutorials, I want to make smaller, more informal tutorials for different things in a physics engine, like slopes, player movements, triggers, etc. But, without more delay, let's move on to this part of the tutorial!

This is the part 3 of a 3-part tutorial.
Part 1:  Collision detection/handling;
Part 2: Gravity, friction, speed, masks and other global/local concepts;
> Part 3: Drawing objects and optimizing your engine.

So click on "Read more" to go to the tutorial!

Read more »
Posted by HugoBDesigner at 9:45 AM No comments:

The work shown in this blog is licensed under the Creative Commons Attribution-ShareAlike 3.0 Unported License.